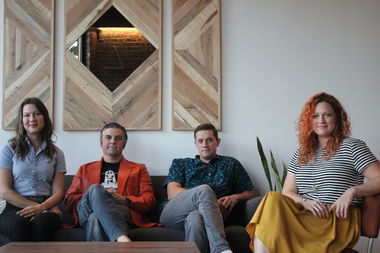 BRIDGEPORT — For years, Metal Magic Interiors helped furnish some of the city’s hottest restaurants from a small shared workspace in Bridgeport.

Similarly, the couple behind Norman Leigh Design have been making custom, Instagram-worthy pieces out of their Pilsen garage.

Now the companies are taking their businesses to the next step with a joint showroom in Bridgeport.

“Our businesses grew kind of parallel to each other,” said J. Taylor Wallace, owner of Metal Works Interiors. “It seemed like a natural step for both of us, especially for designs to have a brick and mortar shop.”

The combination Metal Magic Interiors and Norman Leigh Design showroom and gallery will open Saturday at 3641 S. Morgan St. with an open house celebration. Guests will be able to browse the showroom, enjoy drinks and hang out by the custom-made fire pit in the building’s backyard.

For the business owners — associates who became friends and then partners in the gallery venture — the shop represents the next step in their growing businesses. For Bridgeport, it represents a vital and growing arts and design community, which is now moving farther south down Morgan Street.

“We worked out of our garage. We didn’t really have space for people to come over,” Leigh-Anne Riebold of Norman Leigh Design said. “We needed a more professional space.” 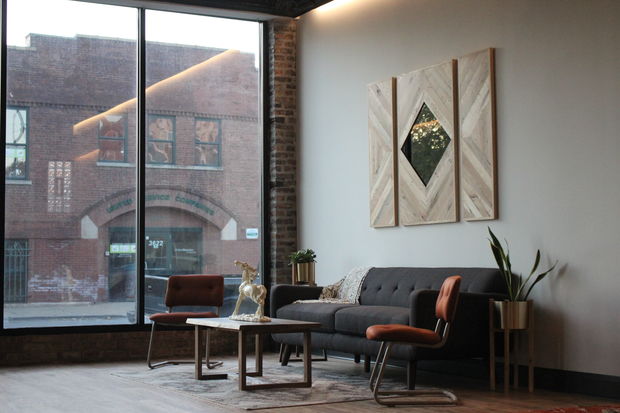 The front of the new gallery includes a wall mirror made by Norman Leigh Designs. [DNAinfo/Joe Ward]

The gallery will have a combination of both company’s works, though the two entities often collaborate. Much of their work is custom made, so the gallery will mostly be appointment only. But they will participate in the popular Third Fridays event, where local galleries open up their doors to the public. Open hours during the holidays will likely be added, Riebold said.

Riebold and her fiance, George Schaefer, met Wallace and Emily Moorhead-Wallace after Riebold was seeking a metal shop to help with one of her pieces. (Norman Liegh builds custom furniture pieces using mostly reclaimed wood from the Bridgeport and Pilsen areas.)

She posted an ad on a Ukrainian Village website looking for metal workers, and that’s how she met Wallace. The two companies began collaborating more closely, and the Wallaces’ even lived in Riebold and Schaefer’s Pilsen home for a year while their home was being renovated.

“We just hit it off,” Riebold said.

The Wallaces bought the building at 3641 S. Morgan out of foreclosure in 2014. It had been a tavern from 1898 to 2007, they said, but it needed extensive repairs. The couple spent years renovating the upper floor, where they live, before moving onto the showroom, which has an antique tin ceiling and exposed brick walls.

“We were really inspired by this space,” Moorhead-Wallace said. “We had to do something with it.” 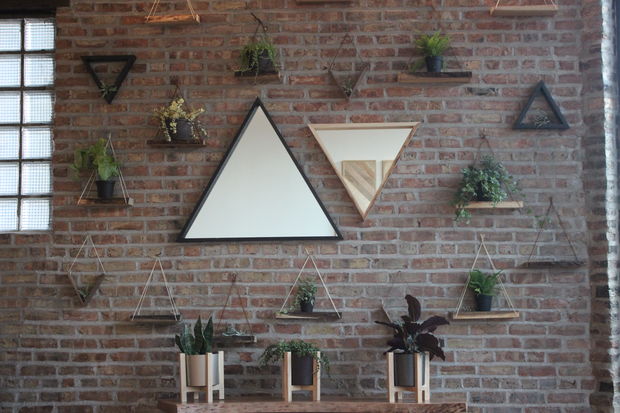 Some of Norman Leigh’s products that will be on sale at the gallery. [DNAinfo/Joe Ward]

Wallace’s metal shop will remain at Bubbly Dynamic, the shared workspace at 1048 W. 37th St. That’s where Wallace has built interiors for restaurants like Antique Taco and Eately.

But now Wallace will be able to host clients and collaborators at the gallery. Norman Leigh will be able to store some of its more massive pieces in the new gallery and display them publicly, rather than just on its social media pages, which have driven much of its business to date, Riebold said.

Already neighbors are curious about the building and the pieces inside, they said. The business owners said they can’t wait to meet their new neighbors and become more prominent members of the local arts scene.

“There’s some interesting stuff going up and down Morgan,” Wallace said. “There has been huge change. If we can kid of add something as a parallel, it’s a good time for that.”